Home / What We Do / PARENTING SUPPORT INITIATIVE 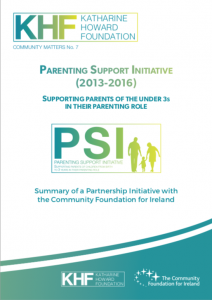 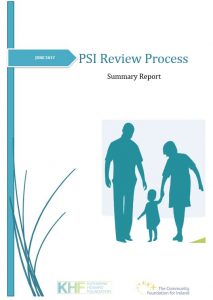 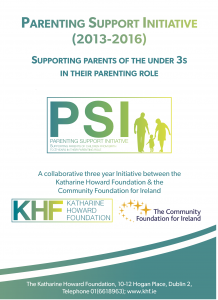 The Parenting Support Initiative (PSI) was a collaborative partnership between the Katharine Howard Foundation and the Community Foundation for Ireland. It was a three year (2013-2016) strategic grants programme with a focus on children from birth to 3 years and their parents, with a particular emphasis on supporting parents in their parenting role. PSI aimed to support a number of projects in socio economically disadvantaged areas or specifically disadvantaged target groups engaged in collaborative approaches to working with parents of children from birth to 3 years.

Below is a map listing the 15* Core Funded Projects under the PSI.

*Originally there were 16 Projects -Longford Community Resource Ltd. finished up as part of the PSI in 2015.

43 Once-off grants were also allocated to Projects around the country as part of the Initiative.

PSI was successfully completed in 2017 with 14 of the original 16 projects still engaged.  A framework for a review process was developed by KHF in consultation with the PSI Advisory Group and the projects. An independent facilitator was contracted to undertake the review.  The review began in December 2016 and was completed in April 2017 and a report on this process was produced in June 2017 which captures much of the key learning.  This Review Process summary report was then presented, shared and reviewed with the projects at a networking event on 31 May 2017.  The report was also disseminated to a number of key policy stakeholders.

KHF has completed an edition of its Community Matters series no. 7, which provides a summary of the Initiative. The summary includes the rationale for PSI, KHF’s approach to planning and developing PSI and an outline of the different project themes.  The three key elements of the Initiative are highlighted – collaborative working, engaging parents and training in and delivery of Parenting Support Programmes.

Central to this work is the recognition of the importance of capturing and sharing the learning from PSI both with the projects involved and with other organisations, agencies and funders with a commitment to supporting parents and young children.

The Foundation remains committed to this area of work and is even more aware of the importance of prevention and early intervention strategies and approaches in supporting parents with a focus on improving outcomes for children.

This website uses cookies to improve your experience while you navigate through the website. Out of these, the cookies that are categorized as necessary are stored on your browser as they are essential for the working of basic functionalities of the website. We also use third-party cookies that help us analyze and understand how you use this website. These cookies will be stored in your browser only with your consent. You also have the option to opt-out of these cookies. But opting out of some of these cookies may affect your browsing experience.
Necessary Always Enabled

Any cookies that may not be particularly necessary for the website to function and is used specifically to collect user personal data via analytics, ads, other embedded contents are termed as non-necessary cookies. It is mandatory to procure user consent prior to running these cookies on your website.